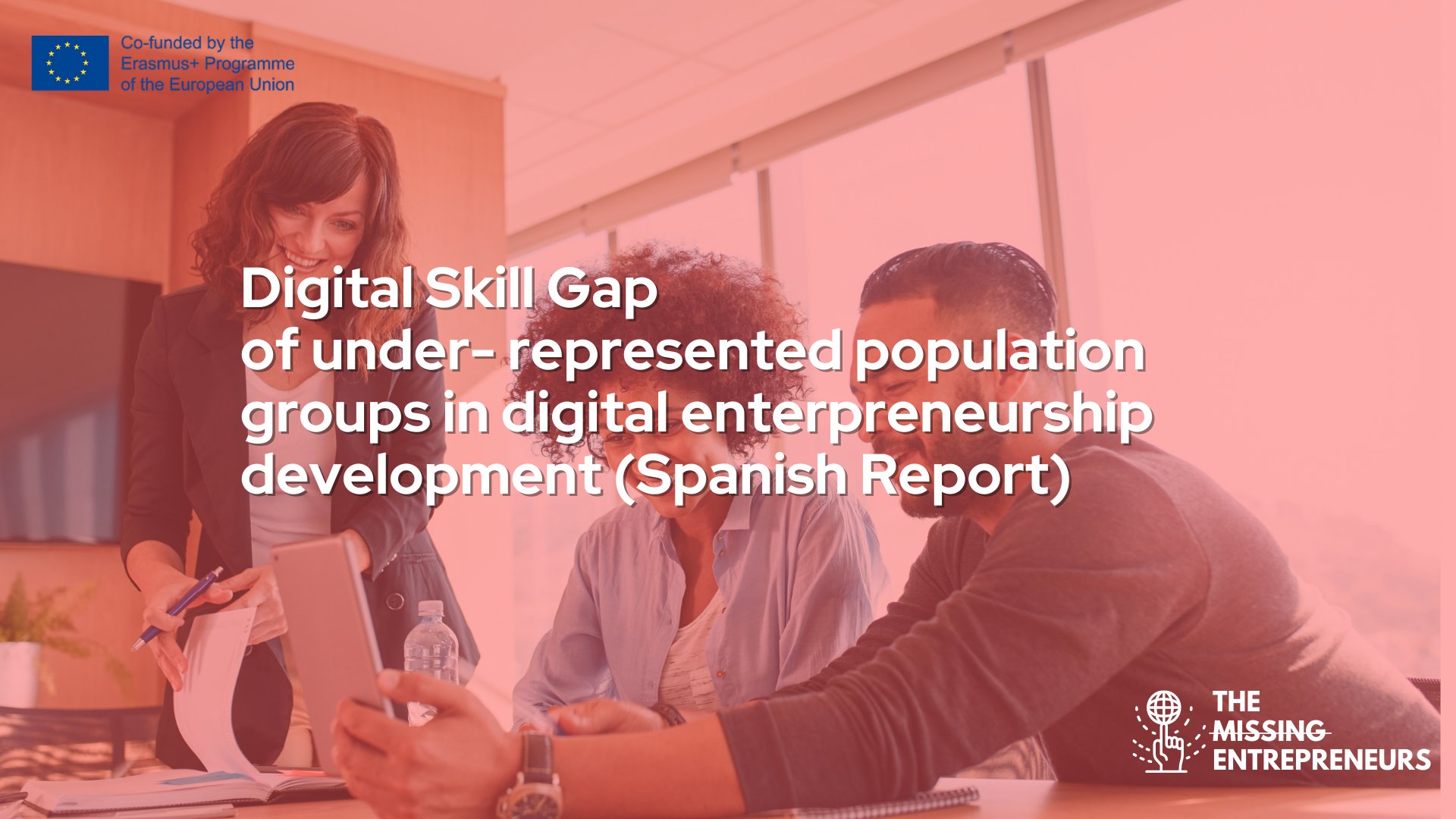 Digital needs for entrepreneurship in Spain.

Prepared by Blue Room Innovation within the framework of the European project The Missing Entrepreneurs.

The european project The Missing Entrepreneurs aims to build a more inclusive culture towards new digital companies and support the development of digital skills and entrepreneurship among vulnerable population groups and still underrepresented in digital entrepreneurship. These groups could be: – Women – Immigrants – Youth – Seniors Before starting to prepare the training program, it is necessary to prepare a a framework of digital gaps in Europe. Is in this context where Blue Room Innovation has been working on the Spain National Report. The report includes a compilation of initiatives for entrepreneurship and some best practises. It is also a paper that describes in detail the current situation in the different groups and the disciplines and digital skills needed by SMEs. Finally, the report includes the research results obtained during May 2021 with a questionnaire sent to the pre-defined target groups.

These are the key findings:

It is interesting to start at the basis that 90% of professions currently require basic digital skills. However, in Spain, in 2019, 36% of the workforce lacked these skills, the situation being worse among the unemployed population (55%) than that of the employed (32%). Focus on the under- represented groups:

In Spain, 45% of entrepreneurs are women, mostly between 25-34 years with university studies. According to South Summit, 22% of Spain’s start-ups are run by women, more than in UK or US but less than in others like Vietnam or Ghana. These data illustrate that its possible a gender gap when talking about entrepreneurship in Spain.

The total workforce between 16 to 29 its about 11.09% ant the employment stability is the lowest of all ages groups. The good news is that The VII Young Business Report 2020, reflects that the number of young people who show their desire to start their own project continued to increase. The profile of the young entrepreneur in Spain is around 30 years old with a marked social character. Although entrepreneurship support has support in higher education, there is a large group of young people who are not in training, education or employment but could benefit from starting a business. Focusing on SMEs and self-employed there is a strong opportunity for entrepreneurship. A report prepared by Telefónica Foundation in 2019 ensures that digitalization of the industry, especially SMEs and the self-employed, and greater digital training of Spaniards are the two key factors to achieve a return to normality in the economy and generation of employment. It’s a vital element to improve to competitiveness and productivity and as it, is reflected in the Strategic Framework in Policy for SME’s 2030.

Unemployment among immigrants continues to be higher than among Spaniards, at 21% compared to 14%. And, undoubtedly, a tool for this will be training and qualification, which in turn represents an additional challenge, since, although there are no in-depth studies, some authors indicate indications of higher school dropouts and less aspirational training in the immigrant population. Entrepreneurship cases are also beginning to appear in the children of immigrants in accordance with changes and technological innovation.

Older individuals have the lowest confidence in their own ability to start and run a business. According to Eurostat, in Spain, the activity rate for people between 60 and 64 years of age is 45%, compared to 72% in Sweden. It must be taken into account that the elderly are vulnerable people before the media, since they are digital immigrants, becoming passive consumers of the digital age.

Supporting the lack of knowledge of digital needs, we will try to support the structured training of 10 key disciplines that The Chamber of Commerce of Valencia detected: Digital Marketing, Ecommerce, UX, Digital Management, Internet of Things, Digital Communication, Web and Mobile Web, Big Data and Innovation. That’s why we recommend these topics for The Missing Entrepreneurshipto create a hands on training for the different target groups mentioned earlier. The centrality of the new information and communication technologies in the various fields has crystallized in new ways of communicating and relating in our life in society. This impact has been generalized in all areas and this outlines new scenarios for the future in our relationship with training and work including the entrepreneurship and specially the digital one. The recent situation in relation to the COVID-19 pandemic and the impacts it may have on the digital entrepreneurship and the labor market in general, have only given greater centrality to the importance of digital skills and their relationship as a competitive factor in a context of economic uncertainty. One of the challenges from a sociological perspective is to explore whether these changes will have an unequal effect among the different members of society or whether, indeed, the level of digital skills can become a determining factor in accessing the market.